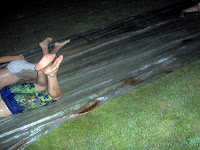 Here's how it's done:
We found a 1 gal jug of IDGlide. ID Lube has a list of places that sell their products. You will need 1 gallon of lube as it is to be the backbone of the 'slide, it makes all the difference, just like with sex.

The plastic sheeting we got from Lowes. If you can, buy the thickest they have. It may be a few bucks more but will last much longer. We bought the thin stuff and the plastic ripped and tore easily. 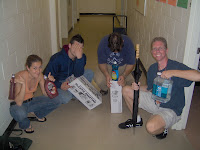 Our ingredients also included 2 bottles of dish soap, 2 bottles of Hershey's syrup, warm water in a bucket from the shower and the lube. Towards the end there was milk thrown in as well.
Anyone that goes to a slip n slide wearing anything other than old shitty clothing isn't doing it right.

It really is that much fun
4 comments:

Email ThisBlogThis!Share to TwitterShare to FacebookShare to Pinterest
Labels: Adventure, Friends, How To

A weekly one hour show featuring half hour pilots that never got picked up.

It would be so frustrating when you find a pilot that grabbed your interest only to be denied any further plot elements and story developments.

If you had to create a TV show pilot. What would it be about, who would be the star and villain?
No comments:

Email ThisBlogThis!Share to TwitterShare to FacebookShare to Pinterest
Labels: If you had to

Why are deaf girls so wicked hot? I don't know why it happens, but as soon as the finger wags against their ear and they shake their head for the international sign for "I'm deaf," it's instant love.

I really need to learn how to ask "Are you 18?" in sign language.

MissDeafWorld had potential but only a slim selection of the UN acknowledged countries entered contestants.
No comments:

Email ThisBlogThis!Share to TwitterShare to FacebookShare to Pinterest
Labels: Sexy

The Recycling Center is a site that shows you a recycling center near you. I've been waiting for something like this to drop into my lap for 6 months. Recycling in Hawai'i is popular, there's a $.5 return on all aluminum cans and most plastic bottles. The program is called HI 5, which is awesome. It is however quite difficult to find a place that takes recycling. Reynold's has a center and so far we've been taking our stuff to them. Otherwise we have to look for the Transfer Station, which may or may not be the dump. Eitherway, there's never an address and no one seems to be able to give us decent directions. 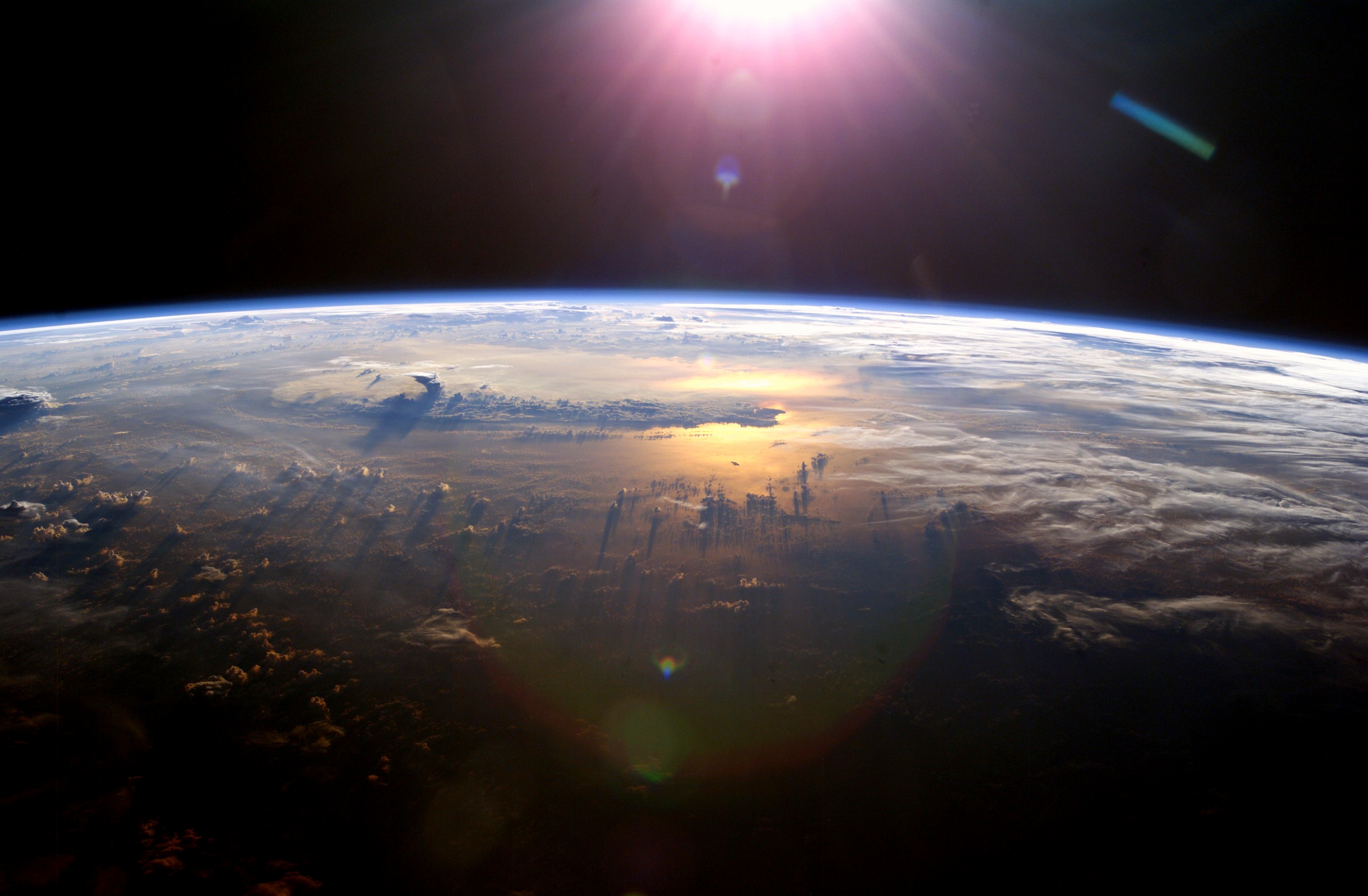 Sunset seen from space, you can tag it with AMAZING if you want but only on your own flickr page.


I have a great time making up words to use in my private conversations with people I trust. Here's what I have so far:
Ironicality - Possessing irony: What you just said had a note of ironicality.
Dialectual - Relating to dialects: The meaning is the same, the spelling is a dialectual difference only.
Deliciocity - How delicious a meal is: The most being Terminal Deliciocity. When the food is being prepared but has reached its peak and will not get any better no matter what else you do, it has reached terminal deliciocity.

If you had to....
Create a new activity, social pass time or hot new trend. What would it be?
Mine would be Surfery = Surfing & Archery = Surfing while shooting arrows at targets.

Email ThisBlogThis!Share to TwitterShare to FacebookShare to Pinterest
Labels: Hawaii, If you had to, links, Newspeak

It's either met with serendipitous joy and a creative answer or rolls of the eyes. I shall now extend these options and this opportunity to you.

I recently read the Wikipuss for Nguyen Loan. You may remember him as the fellow in the iconic Vietnam picture executing a Vietcong soldier, pictured here. Read the entry for a higher understanding of the situation. That situation is not what this post is about, what it is about is this: in 1975, he moved to Virginia and opened a pizza shop until he was discovered in 1990. I know this is graphic picture, but it's actually the largest copy of it I could find on the net and I want to encourage higher quality photos.

The question is, If you were an infamous war icon, dictator, criminal etc and you had to move to another country and have another profession,what would it be?

K: Move to North Korea and write poems about how great Kim Jong Ill is.

J: Move to the naked city in the south of France and sell chocolate

What's is your answer?
3 comments:

Email ThisBlogThis!Share to TwitterShare to FacebookShare to Pinterest
Labels: If you had to, links, Silly

We all know I quit. What you didn't know was that I was still a nicotine addict. I have been using a patch. It was worth it to me to still be consuming nicotine as long as I wasn't smoking. The problem is that the patches are expensive and they're not the solution, they're a means to an end.
I've been keeping one patch in my wallet as an emergency, better to have it and not need it than need it and not have it. I woke up one morning, put on another patch and realized there was only one left in the box. My choices were this:
1. Take the remaining patches then begin my withdrawal.
2. Take the remaining patches, buy more and deal with withdrawal later
3. Finish the patch I just applied and then stop, not using the remainders.

I chose option 3. It was the most difficult option, but sometimes (especially in this case) it feels good to fight something, to take the pain early and on purpose, to have something to grit my teeth against, it's my choice to quit right now, not when the money runs out.
Today is Thursday, which marks the one week it's been since I last put on a patch. Last Sunday we went to the beach, without thinking I went swimming with the patch still on and it washed off. What amuses me is that I still have a square outline on my arms from the adhesive that did not wash off. I noticed it tonight which is what inspired me to write about it.

The patch feels very similar to cigarettes. They're both expensive, smell bad, addicting and difficult to give up. I wonder if they're both manufactured by people that are friends. It's certainly a racket. My box cost ~$55. A carton costs of American Spirits is about $75.

Either way, I'm done with your dirty asses.
1 comment:

I've received two $1 bills recently with markings on it. They had a web address on it: Where'sGeorge.com? You enter in the serial #, denomination, series and zip code then it shows you the path this bill has taken. It looks like bills are entered fairly infrequently, I guess nobody pays much attention to their money.

The 1st bill arrived on June 12th. I know this now thanks to my browser history.

The 2nd bill arrived today, I found it in the till when I came in to work.
No comments:

I moved from Virginia to Hawai'i in the beginning of this year. Hawai'i and most of the rest of the US have different laws regarding their insurance, so I had to get a new policy number for our new car.

Also their website is dumb. It can clearly be seen that the tab I'm currently on does not infact have a title. I'm on the blue tab, not a clearly labeled green. I see several gecko's a day here and they're way more skittish than that accented fellow on TV.
No comments:

Email ThisBlogThis!Share to TwitterShare to FacebookShare to Pinterest
Labels: Adulthood

Tonight I overheard one of the regulars talking to a friend who also had come in to the store. He introduced his friend to his grand daughter, whom he was chatting with on an IM client with a webcam. That's right. You can now introduce people over the internet. This is probably old hat to some, but it's new to me.

Until now the geekiest thing I've come across was Instant Messaging someone sitting right next to me. This was useful because we both had headphones in and were in the middle of several different trains of thought, not to mention what we had to say to each other was not dire, it could wait.

Maybe it's that I don't particularly care for the person in question, maybe he's just not geeky enough for me to appreciate this as a normal thing to do. Maybe I shouldn't judge an eavesdropped conversation.
No comments: 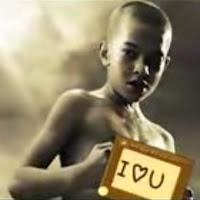 This is the most adorable video you'll see all day.