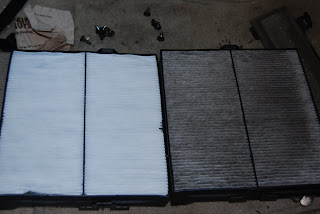 Cabin air filter change involved removing the glove box, unsnapping the old one and inserting the new. One of hte easier jobs to do. The photo illustrates the difference, but in normal daylight the old filter did not look too bad.

A soft tipped philip's head driver can prevent scratches on the screw heads, that's all you need.  I purchased my filter from eBay Motors for about $10. You can probably use an HVAC filter if you want a more DIY solutoin.
No comments:

A director level position has just opened up. The person holding this position quit with about 9 days notice. The week before finals. To take a consulting position. With a week's vacation before starting.
Our employer paid for his training. He used our network to test in a production environment.

Now it's easy for me to judge because I worked with him. He said he had better things to do than have dinner with his coworkers. He usually trained us about 80% of the way, enough to feel responsible, enough to be dangerous, but not enough to troubleshoot, be proactive or to create reliable systems. The off hours guys received no direct training.

When I started, there was almost zero documentation.  What little notes we had was split between our ticketing systems' knowledge base and Google Docs. Usually one person in the dept knew each system. So, if the IT staff was out that day there was no support for that system. Very few things evolved through team work and there was no cross training.

I've documented every tech responsibility I have in a Google Doc. Sometimes my notes aren't %100 clear, but most of them are really great. They're shared with everyone in the team. Not everyone is expected to perform everything, but if the sysadmin is out then at least we have something to go on, plus the off hours guys have somewhere to start. They may not have big picture perspective but they have an idea of the procedure.

You're welcome, work.
No comments:

Email ThisBlogThis!Share to TwitterShare to FacebookShare to Pinterest
Labels: Work

We got a new battery on our trip down south last December. The installer did not apply any insulating dielectric grease, so I bought some from Amazon and a battery terminal brush from Sears.

I cleaned the contacts and the leads with the brush and blew away the shavings. Then using a cotton-tipped aplicator I applied a liberal amount of dielectric grease to the terminals. The internet gave me some direction:


At the high points they touch, and at the low points there are gaps. Dielectric grease will get smooshed in to the gaps, keeping out moisture and electrolytes.

I applied way too much, but no matter.

Subaru's battery compartment comes with an insulator, so I did not install any additional cold weather gear.
No comments:

It's been a long time

If you play Portal, near the end while walking around the Aperture Laboratories offices you can see a slide show presentation.  I recreated it and have made it available. Some of the items are funny or non existent in Google Docs so I recommend downloading it if you're really interested.

Edit: Fixed sharing permissions. Everyone can see it now.
No comments: