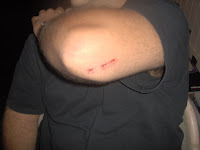 Every time I go to the beach I draw blood. It's because the floor of most of the beaches here have rocks and I'm pretty clumsy even in the water.

This time it came when I was swimming under the missus looking up at her while we were snorkling, I swam into a rock and scraped my arm. I'm starting a new label of events here based on these wounds.

It bled pretty well in the ocean but the salt water helped clean it out and now it's just sore. The bleeding caught the attention of a few beach goers and it's always nice when strangers take concern in my well being.
No comments:

is that how they talk on the mainland?

Having just returned from my trip back to the mainland yesterday, I'm still exhausted.
Here's a list of things I didn't like:
1. Driving
2. Other people driving
3. Other people not having/using turn signals while driving
4. Everyone in a rush
5. Being told that I don't listen to advice and I try to do too much when what I really need is help.
6. Not sleeping enough
7. Sleeping in a room with other people
8. Driving through DC with unexpected construction and having the detour put me going in the wrong direction
9. Missing Paul's wedding for the above
10. Missing my grandmother and aunt's birthday parties because of the above
11. Getting lost in rva
12. Adjacent passengers on airlines with a rat tail who growls intermittently and gives me the weird eye for eating vegan.
13. Funerals
14. listening to / hearing about Cho

Glad to be back on the island.
No comments:

It's easy to be stoic about a situation like this when you don't have a personal connection to it. I grew up in Blacksburg, most of my friends still live and work there including an EMT who shuttled the wounded, and a bus driver who's buses were earmarked to carry them to the hospital.

Several other friends and their parents work at VT. An old friend used to liv in Ambler Johnston.

I know people by 2nd and 3rd degrees of separation that were shot (and survived) and had direct contact with the shooter.

The solution isn't as simple as more or less guns in everyone's hands. A law isn't going to stop this. We live in a strange world that teaches us that this behavior can lead to some sort of resolution.

There's corruption and demeaning behavior everywhere. No single source can take responsibility. Music, video games, the government, business, popular culture isn't geared towards making a harmonious society. Almost every aspect of my life is exposed to cut throat greed and I'm not blaming any one of those.

This event is not a surprise to me. It hurts, it's confusing and I don't understand it, but it's no shock that it happened. The difference for me is that I'm connected to the location and people.
No comments:

I've tried calling several people I know and the phone lines are just over loaded and it seems to be hit or miss as to whether I can get through.

Everyone I know seems to be OK, just confused and sad. I'm not sure how I feel about it, it's a lot less personal than some of the other tragedies that've happened in Blacksburg but it's still my home town. But it really comes down to the absolute end of innocence.

Looks like we got out at the right time.
No comments:

Email ThisBlogThis!Share to TwitterShare to FacebookShare to Pinterest
Labels: Life 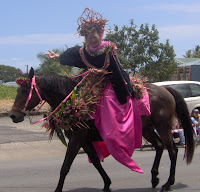 The parade was today which I believe mark's the end of the Merrie Monarch festival. The parades in Blacksburg were mostly about throwing candy at people. Here there was only one candy thrower and a ton of horses and smiling people. The weather was great as usual and the parade paraded right down our street in front of the shop. My boss set out 4 folding chairs for us. It was a good time.

There were lots and lots of horses and many of them had extravagant lei's. Each rider, especially the women, looked like royalty right out of Lord of the Rings.

Pictures can be found here:
http://picasaweb.google.com/bazuzi/MerrieMonarch
No comments:

Email ThisBlogThis!Share to TwitterShare to FacebookShare to Pinterest
Labels: Hawaii 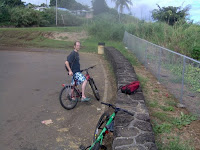 My bike got stolen last night. Stupid me for not locking it, it was only a matter of time. I got to file a police report for the first time though. The officer was really nice but didn't offer much hope.

This is the only picture I have of it, it's the one K is not riding.

Some no talent ass clown now has a nice Diamond Back Response with 24 gears.
No comments:

After a week without internets this is my first post.

I installed Vista ultimate last night. I have an Averatec laptop with a 1.8 Turion which is a 64 cpu. My brother sent me 2 install discs, a 32 and a 64 bit. My plan was to put 64 bit on the laptop and 32 bit on the desktop when it arrives.

The 64 bit didn't install correctly. It crashed twice during the install and upon examination of the disc I saw several scuffs and a dime sized section that is severely scratched. I switched to the 32 bit disc and was on my way.

And by on my way I mean it didn't have device drivers for my wifi card, video card and another "PCI Simple Communications Controller." I don't know what that is and neither does windows update. The Averatec website says that the Vista video driver for this model would be available in March which was last month. It's still not out. Averatec doesn't allow much communication without the serial number and the sticker on the bottom has rubbed out and is completely white. When I called they said I'd either need the s/n or the original reciept that shows when I bought it to tell whether it's still under warranty. They will be getting a letter as soon as I can find a way to write to them that doesn't require entering my serial number

Now's a good chance to encourage any readers I have to backup all their serial numbers, window/game CD keys and any other annoying and rarely used but incredibly important information in a Google Docs file. You don't have to remember to back it up, it's always available and linked with your gmail account.

Back to the wonders of Vista:
It looses my wifi card every once in a while. I've had it installed for about 24 hours now and it's lost it 4 times so far the fix is to restart.

The Microsoft USB mouse I use gets lost as well after about 20 minutes of use. Plugging it in to a different USB port does nothing. The fix is to restart.

Videos don't play properly. The video is choppy and lags behind the sound. When I play it in VLC it still is a little bit choppy but at least in sync. The fix. I don't have one yet.

I've been playing Diablo II for the last 2 weeks becaus it's the only game that'll run on my laptop. Well after Vista, it doesn't play because it can't run Direct3d or DirectDraw. Vista was supposed to be great for games. The fix is to run the game in Windowed mode.

The scroll bar on touch pad has been extended to about 3/5ths of the entire touchpad. It means that while I'm navigating the computer I end up scrolling up and down incredibly fast highlighting and deleting anything that I was working on. The fix? Reinstall XP.

When my desktop arrives it may be time to give the old open source community another chance at my laptop.
No comments: