I made lebne for the first time this week!

Email ThisBlogThis!Share to TwitterShare to FacebookShare to Pinterest
Labels: Food

The land of hate and honey

I moved to MA a little over a month ago and have serious culture shock.  The neighbors above us are passive aggressive not making any effort to introduce themselves and in fact making an effort to avoid any interaction.  One of them ran to his car when he saw me pull in and pulled away quickly before I got out of my car.  None of them take out the trash, the only responsibility that we might share. After taking the trash out Thursday night for Friday pickup we left to Richmond for the weekend, on Monday we returned to find all the containers still sitting on the curb: 4 days later. They make no effort.

Tonight the person driving behind me honked because they felt I wasn't turning soon enough, despite the slushy rain and snow and the consistent traffic. They didn't have their lights on and I was the one not holding up my end of the social contract.

They're nice in person. When they get in their cars they turn in to monsters

Migrating from Gmail to GAFYD

I started moved from using Gmail to Google Apps For Your Domain. Here are a few resources if you decided to make the move yourself.

Migrating mail:
https://mail.google.com/support/bin/answer.py?answer=21288
You lose labels if you do it through the web. If you use Outlook it should be flawless, but you need Education(must be a school) or Premiere edition ($50/user/year)
I'm sorting through my thousands of emails relabeling everythign now, using the keyboard shortcuts for the first time and it makes pretty quick work of it.
An excellent resource for migrating from Gmail to Google Apps by someone who's done it. The background is a poor choice and hurts my eyes. http://base6.com/2009/06/15/migrating-from-gmail-to-google-apps/
Contacts, you can export them and import them easily; keeping groups as well.
Calendars can be also exported and imported.
Here is the show stopper for me: the missing features. Last night I was looking for some missing features and came across a thread in Google's Help forum about Buzz in GApps:

Beyond Buzz and Voice, the list is long: Reader, YouTube linking, Google Profiles, Analytics, Latitude, Wave, iGoogle even Google Groups into which you and I are posting right now... these are all services that only work with a Google Account, and don't work (or are mostly broken) with Google Apps accounts.

The poster talks about how Gmail is a free service and gets all the new features and integration and paying Premier members of GApps have to fight for them. This is ultimately what swayed me. As far as I can tell the only advantage for me was signing in and seeing Bazuzi instead of Google in the top left, which, with the new Bazuzi logo from Jan, is pretty cool. I'd then have to wait for all the other features to trickle in. Migrating all those things, and getting friends and family to start following me at a different address along with competing with my gmail address for unique addresses and accounts(already claimed my Google Profile with Gmail) was going to be frustrating and fragment my audience.


I'm sad I won't be using the family domain to log in, but that's it. I still give out my email address as MyFirstName@MyLastName.com and that's pretty cool.
5 comments:

I'm using W7. This will probably work on Vista as well. Thanks to Kevin for helping me figure this out using Buzz (which turns out to be a little more productive than Wave (which I thought Wave was designed for)). Buzz allows many of our friends to read our conversation but I thought others might want to see it also.


My netbook already launched GMail when I click on mailto links but my desktop did not.Somewhere along the line I'd set the netbook to do this, but I couldn't figure out how.


Google suggests using Notifier but if you're using Chrome perhaps you're already using an extension for that. Notifier isn't a resource hog, but I don't need over redundancy.
This MS Help site: http://windows.microsoft.com/en-US/windows-vista/Change-the-default-e-mail-program
Tells you to go here:
Control Panel\Programs\Default Programs\Set Default Programs
To designate default actions for programs and file types.
There you can set Google Apps defaults, including MAILTO links on the web. You still need Google Apps installed, but that gives offline email which is something I want and already use.
While you're at is, why not install Google Pack (which includes GApps) and let it handle package management for you? You can ignore the Spyware Dr w/ AV and install Security Essentials which is free and runs on XP and above Windows clients.
4 comments:

These doggies are big

We took HB to a farm last week. He's been making do with fairly short walks around the neighborhood; competing for space with cars, houses and other doggies. We have an awesome friend who's family farm is close by and she let us come up for the afternoon.
HB was a little nervous at first having never seen horses before.

He quickly made friends and after introductions they all got along famously.

He had so much fun exploring and running around that he didn't want to leave. He ran for 3 or 4 hours, playing in the snow, playing with their dog; Bodi; and exploring the fields. I'm really glad we got a chance for him to run. He doesn't enjoy computers like I do, so actually doing something was pretty great.
2 comments: 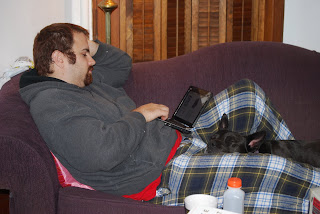 Now that I'm on the mainland I get the pleasure of living with our animals again. I walk HoneyBear 3 or 4 times a day and he sits at my feet under the desk all day watching me fill out applications.

We left him with his nana this weekend where he gets spoiled in all different ways. He was a rescue and had a horrible life before we found him. We're all pretty lucky.

Here you can see him suffering 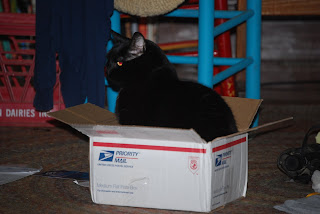 My long lost cat, Merlot. I've had her since Xmas 1999. So she just turned 10! She loves to torture HB and then cry about how little food she gets. She is incredibly loving now that HB is gone.
2 comments: