I recently took a contract to migrate a non profit from GoDaddy email to Google Apps. Despite a good deal of research and assurance from Google Enterprise support we ran into several problems, enumerated here.

The GAMME tool likes to run on a machine set to Greenwich Mean Time.  It will not run in Hawaiian Standard Time. In Win8 it will not run at all, Win7 gives and error message until the time zone has been changed.  The Irish Google support guys figured that one out.

Do not change the MX records until the mail migration is complete. If MX records are changed from GoDaddy's servers then the GAMME IMAP authentication will fail.  In hindsight this seems logical, at the time it was not obvious and was not documented.

The GAMME tools looks for a migration.txt with the format:

GAMME will only migrate mail if the destination account exists, it will not create a new account. I'm not sure what you're supposed to do if you can't change everyone's passwords. There's supposed to be support for using an admin's credentials instead of the user's but that was never successful. Documentation says to run it for no more than 25 users at a time, the realistic number is more like 3 or 4.  More than that and it would error out.

We ran GAMME against a particular user several times because their account had over 10,000 emails and kept failing. Each time we ran, the tool counted a different number of emails to migrate.  The user should have pruned before migration, but GAMME should be able to give a precise count.  There's no way to know if it got all that mail. 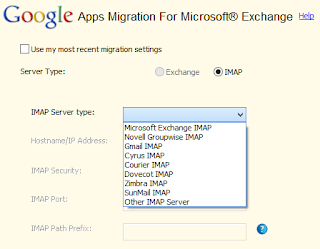 Google support indicated IMAP server type to use is Gmail.  That's if you're migrating from gmail to Google Apps. The most success was had with Cyrus IMAP migrating one or two users at a time.

There is no straight forward, accurate procedure for migrating from GoDaddy to Google Apps.  Many of the instructions from Google support were wrong or ended up being trial and error troubleshooting. Most of documentation is for an actual MS Exchange or Lotus Notes Domino server.

Google Enterprise support is often just as disorganized as others' support teams.  The Irish team seemed to be the most technically minded but you don't get to choose who answers your call. Each team we spoke with has a different approach.

I will continue to help institutions use Google Apps but I will never promise to migrate mail, it's just not worth the heartache and difficulty.