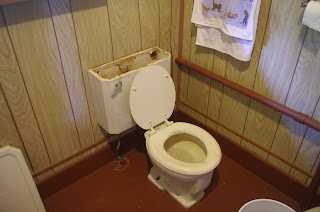 The original toilet. The tank is connected to the bowl via a separate pipe.  It was sealed using several layers of stuff, the last of which I'm pretty sure was packing tape.
The seat lid was deteriorating, but I don't think it has mold, it was just old.  Also: gross.

My monkey wrench on it's widest setting was just barely able to fit around the pipe's bolt.  I'm glad it's gone and it's now up to modern standards.  The old bowl and tank are destined to become planters. I left VA in part to avoid becoming a redneck. 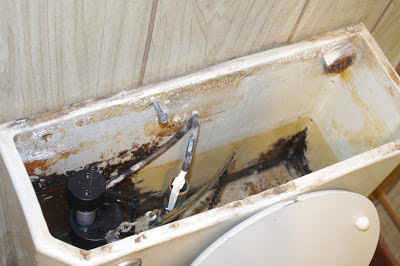 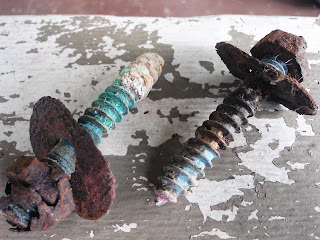 The tank is fastened to the wall.  In the center it hangs on a bolt. On the right it's screwed against the wall.

This is single wall with some particle board paneling. I could almost hear the wall breathe a sigh of relief when I removed it.

It's neat to see the effects of the different exposure had to the screws.

There is no toilet flange At least it's not a separate piece that gets glued to the drain pipe. The drain pipe is more or less level with the floor board. The old toilet had a wax ring that just lined up with it it. The toilet had two of four bolts screwed directly into the floor, front right and back left. Front left and back right were empty. 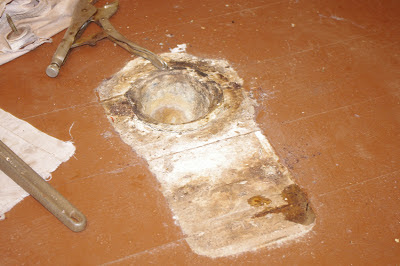 In the interest of getting our only toilet up and running ASAP, I put in the new toilet without a flange telling Wife not to rock back and forth.

I picked up a replacement flange after work. It fit inside the drain pipe I then screwed the flange to the floor. That feels like a bad idea.

Thankfully the floor does not have any dry rot. The wet spot is from the removal of the old toilet. The brittle spot on the left side of the drain pipe is where the old toilet was bolted to the floor.

The drain pipe looks like steel and I feel like the next time I have to replace the flange I'll be installing new pipes. I read somewhere to replace the toilet flange every 5 years. So I scheduled that (I like putting things in GCal really far in the future).

The toilet has been in use for a few weeks now and after tightening down the toilet there have not been any leaks.  I'm happy this project is done.