I finally remembered to look for 5's V speech on the web. I found it on WikiQuote
here it is: 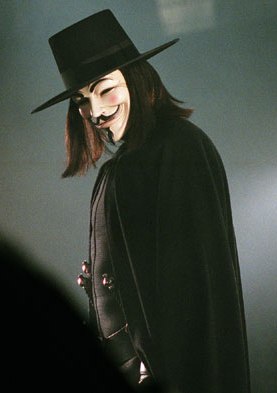 Voilà! In view, a humble vaudevillian veteran, cast vicariously as both victim and villain by the vicissitudes of Fate. This visage, no mere veneer of vanity, is it vestige of the vox populi, now vacant, vanished, as the once vital voice of the verisimilitude now venerates what they once vilified. However, this valorous visitation of a bygone vexation stands vivified, and has vowed to vanquish these venal and virulent vermin vanguarding vice and vouchsafing the violently vicious and voracious violation of volition. The only verdict is vengeance; a vendetta held as a votive, not in vain, for the value and veracity of such shall one day vindicate the vigilant and the virtuous. Verily, this vichyssoise of verbiage veers most verbose vis-à-vis an introduction, and so it is my very good honor to meet you and you may call me V.

On WikiQuote there are a few interpretations, it doesn't seem like everyone is exactly sure of every word, but this is close enough for me without having to pay to see the movie again. I wonder if Guy Fawkes masks will be as prevailant this Halloween as the Scream masks have been previously.
Oooh! another quote found just this very instant. It was written on the mirror somwehere. I suppose Latin really lended it self very well to the Alliteration:

"Vi Veri Veniversum Vivus Vici".
Translated as
"By the power of truth, I, while living, have conquered the universe."

I now challenge you to a V duel: