I had a BM

I was skeptical going into it. My friends in MA knew that I was not really into the idea. Going to Burning Man a week after moving back to Hawaii?  Wife moving from MA to VA, driving across the country to meet me in NV?  It sounds like a mad plan. The reason was to give us an experience that separates the New England chapter of our lives from the next chapter on back in the islands. 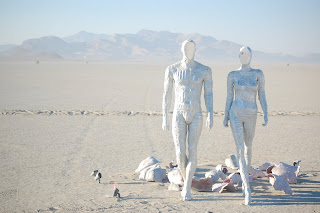 Burning Man is both amazing and disappointing. It's radical self reliance on Walmart at the last minute and Amazon if you planned ahead.  It's a place for rich white people to go and be rich and white.  Those that can afford a week's worth of resources, away from work to look at art and party are the 1% of the world.


Youth, drugs, sex, bacon and alcohol; in that order are what I saw most people going after. If you're not here to get drunk, laid, do drugs and party you need to figure out why you're here. 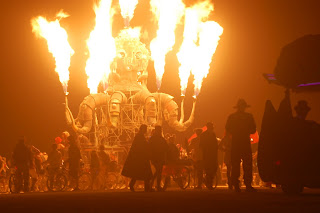 Some of the art was outstanding.  Art cars are largely awful.

I fixed a flat tire for a stranger in another camp as a gift, mostly to give something. They gifted me a CD of their own music. Living in a gift economy has made me realize that I prefer it over barter.

The playa dust sets the scene for a surreal landscape. Black Rock City is a prehistoric lake bed. The dust is in everything. It washes away the stink. It levels the playing field. 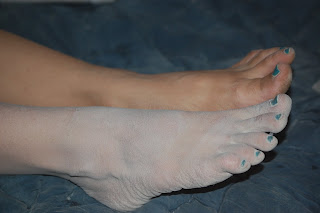 Or so I thought. I really wanted it to be a barrier. I wanted it to screen out the ones that didn't really want to attend.  I couldn't understand why so many people would go to just dance in the desert for a week!

I really enjoyed the sexy post apocalyptic dress code that it necessitated.

The first 2 or 3 days we were there I hardly ate anything. I hydrated very well but just was not hungry despite being incredibly active. Learning how few material goods I need to be happy was a really liberating experience. No internet, phones or screens for a week!

The most disappointing aspect was the music.  I wanted to not hear anything I would recognize.  I heard Kid Rock, Melissa Etheridge (on repeat), Limp Bizkit and Katy Perry & Carly Rae Jepson not ironically. 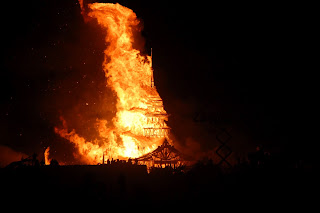 
I'm pretty sure my gift to the Playa next time I attend will be catering to the monogamous, vegetarian and sober crowd, the under served population.

And that's the story of my experience in Burning Man, Alabama.

You would go again, though?

I went to some smaller regional burns when I hung out with fire artists, and they felt like more artistic frat parties. Was BM large enough to feel welcoming of multiple experiences? I mean, if you wanted a quiet, meditative burn experience, could you have it?