A couple of months ago he had a swollen spot on his ear. The vet said the capilaries had burst from him shaking his head and blood was 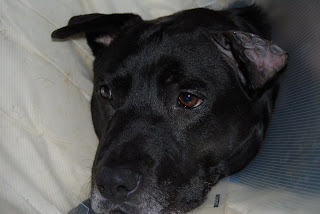 pooling between the two layers of cartilege. They drained the blood and buttoned up his ear to keep pressure while it heald, so if it continued to bleed it would be forced out of the ear instead of accumulating. He looked like this for about 2 weeks. He's all better now.

I sat on the front porch with him today and read, he seemed content enough to sniff the air and regard each passerby. When I was finished he looked a little wanting, so we walked down to a field where he can run without a leash. Almost no one uses this space despite being across the street from an apartment complex.

An aside here, this space is a field according to Google's satellite imagery, but the Street View shows a complex there, which is just wild to see.

As soon as he is off leash he sprints off, smelling and dancing and running and is as happy as can be. He's an excellent sprinter and found his way to the other side of the field where I could see him snort something and then roll. I yelled for him to stop and he started runnig back to me, caught another scent and rolled in something else. I caved and stopped yelling at him and he found a third place to roll. He was as happy as a pig in poop.

When we got home I gave him a bath put his face still smells bad.