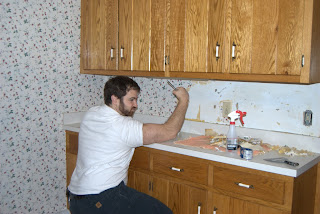 My Aunt's kitchen is being redone. I went with some friend and we spent the afternoon scraping it away. She has an old house in New England, the walls are plaster and haven't been touched since she moved in over 10 years ago.
We brought scrapers, vinegar and professoinal stuff called DIF Wallpaper Remover. The vinegar was much more effective than the DIF. We scored the paper using a special tool, then sprayed on vinegar and let it sit for about 15 minutes.  The vinegar wasn't perfect but it did a decent job of dissolving the adhesive.

Email ThisBlogThis!Share to TwitterShare to FacebookShare to Pinterest
Labels: Thing-a-Day

This is an awesome picture!!!!!