Both the vegetarians have left the house for the 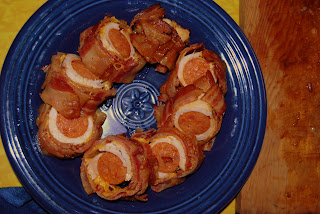 holidays. The two meat eaters in the house have been having Meat Fest 2008 (tm). We did steak chili, prime rib for Gregmas, steak and eggs for breakfast, chinese food.

There's already a huge fanbase on Internet. So by no means is the bacon weave a new idea, but it's still awesome.

One layer 6 x 7 bacon weave, lightly cook until chewy, definitely before it's crispy. Uncooked turkey slices wrapped around portugese sausage, baked until turkey is done.
Top bacon weave with cheese, roll around turkey/sausage like a bacon burrito and use toothpicks for structure. Bake until done.

Scallops fried in bacon fat and pork stuffing (as the vegetable). 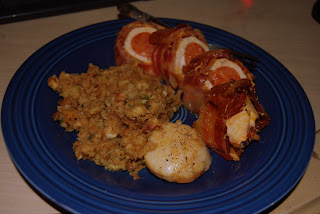 Sounds good. I'll consider making this the official Gregmas dinner dish. Lucky for me, I'm dating a German, so you know she's all about meat/sausage/non-vegetarian food.

it looks like sushi with bacon replacing seaweed, now that I think about it. that's a trend I'd like to see get started.