A friend of ours is leaving soon. We met him a year ago when he traded a dead laptop for an Xbox controller. "You're like the most legitimate people I've met since I moved here" he said to us when he came over for Thanksgiving. Despite the 6 year age difference and our vast energy levels we became fast friends.

He's leaving on Wednesday back to the mainland and it's likely to be a long time if ever before we see him again. I will be lonely without him.

We said goodbye with fireballs. 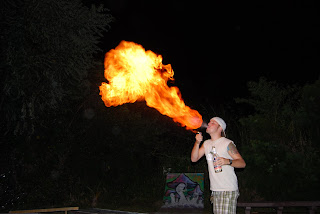