GSA's were personal Google engines, it would index all the documents on your network and make them searchable.  They were leased for a few years after which the hardware found its way onto eBay. A quick BIOS flash from Dell and they were restored to a normal PowerEdge. 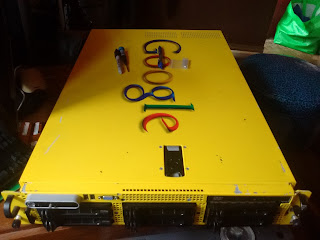 I bought this on eBay in 2012, sniping it for $100. Other PowerEdge 2950's was going for >$500, so this was a steal. They're still on eBay, mostly newer models and some 1U SuperMicro models which still look appealing.

At the time it was a beast and a perfect lab machine.  Now it feels like a lumbering hulk.  It's still ridiculous looking which is the hardest reason to give this up and I need the space and I don't have time (parenthood!)

I'm also giving it up because I haven't turned it on in 3 years.

During POST it draws ~300w with idle of around 240w.  Powered down is still draws 40w. All of this is with only one of the PSU's connected.

It's listed on Craigslist and if I don't get any hits in week it'll go to the e-waste. Here are the specs before I sell: 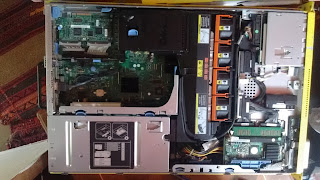 Email ThisBlogThis!Share to TwitterShare to FacebookShare to Pinterest
Labels: Tech