Last week I went to O'ahu with the middle school. I was frantic leading up to the trip, a week of 12 & 13 year olds! after the first day I fell right into it and had the time of my life. The only written assignment was a reflection on the activities we did, here are a few of my excerpts:

Woke up late again. My tent group was already on their way to the beach which is awesome. We chanted E Ale E* to chant out the sun which generously and magnanimously demonstrated its beauty.
This was prefaced by Auntie Ana encouraging us to observe our surroundings and how the morning can dictate how the day will play out. While her intentions were good and even some of the questions she asked were relevant and purposed, but I felt some of them did not point to any useful knowledge if answered; they were tedium. I don't remember the specifics but I remember feeling frustrated.
After a fantastic meat filled breakfast we went to Lo'i. I'm still unsure if this is an event, a verb, a location or a plant. But it involved removing invasive species so that less invasive species (Ulu) could grow. Ulu gets a fee pass in the hearts and minds here. This process was messy, I ruined brand new shoes, but I don't mind. It was well worth it; mud up to my knees working int he 'aina with our class. Giving them a chance to get dirty, use their energy and be kids. I took tonnes of pictures.
In the afternoon we went to the fish ponds. The event was soured for me by the guide mentioning "plants" after "we are working hard to remove all invasive species," referring to haoles.
My brain replied with "Hawaiians are not a different species" & "I'm not invasive." It also knows it's the same Hawaiians that were around to accept the invasive species originally, probably as a business venture or to solve some problem. No matter what, blaming me is not fair.
My heart hates it. It's unfair to expect that everything is not brown skinned is to blame. I think my sense of fairness is acute, so I will just leave the rest to "I did not like that part."

*E ala E chants in the sun, (La in Hawaiian). It helps focus the day with our group and recognize our surroundings as the paradise it is, not just a world of ipods, computers and pop music. It's about the day, the weather, clouds. 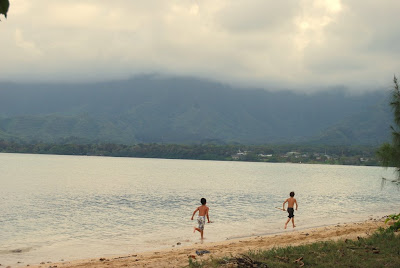